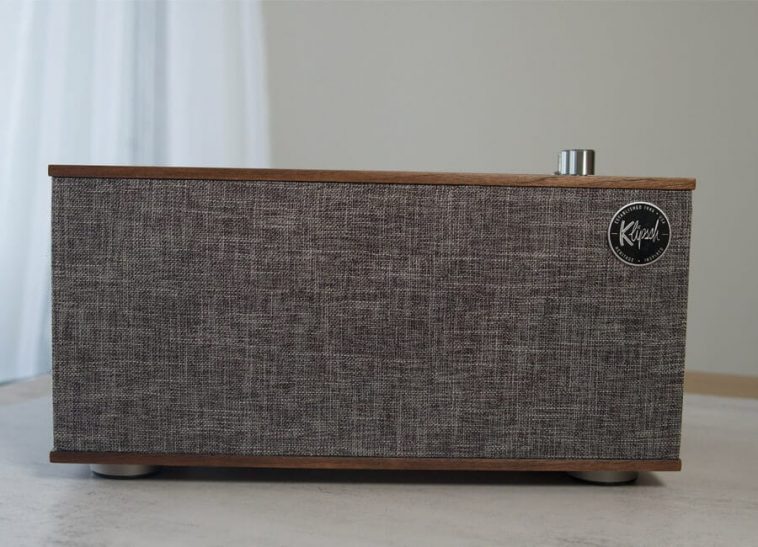 Simplicity, they say, is the ultimate sophistication. One glance at the Three II’s beautifully crafted mid-century modern aesthetics is all you need to fall in love with the sound system.

Klipsch The Tree II has a sleek wooden cabinet and tactile metal controls that are easy to use. It equally has a sophisticated fabric mesh grille. Standing at just over a foot wide and seven inches from the ground, it is one portal device that can be placed virtually anywhere. What’s more? This device also has a 3.5mm port, an available port for mobile connection, and supports Bluetooth 4.0. It also has a USB port, but it is reserved for only updating the device.

The USB audio port can be used at any time for music playbacks. For lovers of hi-res music, this model also comes with 24-bit / 192kHz decoding that will help you better enjoy using the device. Unfortunately, the absence of a battery for this speaker makes it difficult to either tag it along with you or move it.

The sound field of Klipsch The Three II is fairly wide, and the sound that it generates is usually beautiful, pleasurable, and deep. The mids sound generated are also clear and well-defined but producing extremely high tones could be a real challenge.

Klipsch The Three II speaker comes with a stylish old-school look that guarantees to steer up whatever vibe that you seek, be it retro or new school. It also has a robust appearance and a hard frame. If you’re worried that this speaker may be a little out of place with an emphasis on industrial design, don’t be! Because it will almost perfectly blend with whatever design that is next to it. The knobs that control the source and volume which is located at the top of this speaker are among the many things that people fancy about Klipsch’s The Three II. It also comes with a stand that prevents bass sound from sagging when placed on a solid surface.

The Three II speaker by Klipsch is quite user-friendly and can be controlled with the aid of Bluetooth, a music streaming service, web page, or any app that you prefer.

With the help of some cool buttons at the top of this device, more options are made available to you for better control of the volume management and others, so you don’t necessarily need a smartphone or an app from the manufacturer to enjoy using this device.

Next, we will look at what is largely considered as the pros and cons of Klipsch’s The Three II by many.

PROS AND CONS OF KLIPSCH THE THREE II

THE INPUT VARIETY OF KLIPSCH THE THREE II

When the conversation boils down to the input variables of Klipsch’s The Three II, note that this one-of-a-kind device avails you the opportunity of playing audio files from several sources compared to the other models before it and within its range.

It also comes with a stereo RCA input that allows you successfully hook up with your music streamer, CD player, and any desired audio component. Among the listed features of this device is a built-in phono preamp that lets you connect directly with a turntable. Awesome right? We know!

Klipsch The Three II equally comes with a Type B USB input that also allows you to play audio files with high resolution through your personal computer or laptop. Music can also be played from any of your handled devices via its integrated stereo minijack input. Its embedded Bluetooth connectivity allows you to enjoy wirelessly and unending streams of music from your gadgets such as your smartphone, tablet, and other Bluetooth-enabled devices.

With some of the components and features that we have listed which come with the three II devices, one would think operating this device is rocket science, but on the contrary, it is not. This speaker is considered incredibly easy to use by a lot of people that have looked the Klipsch way. When closely observed, one will quickly take notice of its panel that is properly aligned with an old-school paddle switch which allows you to power or shut down this speaker. The knobs equally let you adjust the volume setting and ensure a smoother cycle through whatever source that you may have hooked up with. After a successful connection to your preferred music source, a subtly illuminate white LED will let know which your connected to.

Klipsch The Three II also has a remote control that has buttons such as power, mute, play/pause/forward/backward, volume up/down on it for inputs. It also has a couple of LED buttons that are clearly labeled for turning on/off all the speaker LED lights.

The sound quality of the Klipsch The Three II device is what we will look at next because it plays a significant role that determines the overall performance of the device. This device has two 2 ¼-inch full-range drivers that are responsible for the detailed stereo sound that you will hear when you listen to your favorite tunes with the device. It also has a 1/4″ long-throw woofer that fills out the lower end of the device with depth and warmth.

It’s also essential to note that the drivers of this awesome device come with a bi-amped that delivers a tremendous amount of sound clarity and accuracy. Its dually opposed passive radiators contribute to the extra bass-punchy vibe that is felt while using Klipsch The Three II speaker.

The 192 kHz, 24-bit decoding is also among the credible features of this device which ensures you enjoy sound that is generated from your computer.

We believe that some of the features and functions of Klipsch The Three II device that we have mentioned in this guide are enough to convince you to add it to the list of things to purchase when next you seek to get a durable speaker that will serve. It should also be known that this speaker effortlessly beautifies the environment where it is placed. Some of such places where it can be kept include home offices, kitchens, bedrooms, galleries, and so on, so hurry now get one for yourself to have a great first-hand experience of all that we have said. Thanks for reading! 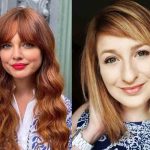 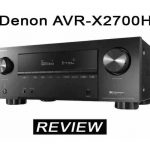