Mala beads are a kind of spiritual device which have been used by yogis and all kinds of ordinary spiritual seekers for many thousands of years, for the purpose of maintaining focus while meditating. They were first created and used in the country of India more than 3,000 years ago, and they are thought to have their roots in religious practices associated with Buddhism and Hinduism.

Their original usage was in conjunction with a special kind of meditation known as Jaba, which carries the meaning of ‘to recite’. The word Mala itself is Sanskrit in origin, and its meaning is ‘meditation garland’. During meditation, Mala beads provide a tactile device for centering oneself on the physical world, while the mind is free to explore the spiritual world. While the beads themselves often consist of gemstones and other stones, they can also be made using some of the highly attractive and colorful beads found at Woman Shops World, where you’ll find an extraordinary selection of beads for your mala, and also learn more about how to wear mala beads.

What are Mala Beads?

Used generally to keep count while reciting prayers or mantras, mala beads consist of a string of 108 beads plus an extra one known as the guru bead. These beads are often used during meditation sessions for yoga, and they are the newest trend in wearables related to the practice of yoga. Having a deeply religious background, mala beads are thought to contain potent energies as well as highly sacred significance.

Although the precise reason for the 108 beads has been lost to antiquity, many believe that the one represents God, the zero means emptiness or humility, and that the eight stands for the timelessness of infinity. For wearers of mala beads, they become a reflection of a person’s journey, and in that sense they become a very personal object, taking on specific meaning for each individual.

What is the Best Way to Wear Mala?

There are several different ways to wear your mala beads, and for most people the choice comes down to whatever is most comfortable for them, and also sometimes in deference to particular occasions. Many people only wear their mala beads during meditation, feeling that the mala provides a sense of being anchored through all the various energies which are experienced during meditation.

Traditionally, mala beads are worn for 40 consecutive days after obtaining them, to provide yourself with a chance to completely attune to the energies of the beads. Many people prefer to wear the mala as a necklace during meditation, because it provides a sensation of comfort. Probably the most convenient and comfortable way to wear mala beads is as a necklace, because they are not only a device for counting mantra, but they are also generally very beautiful and are easily worn.

By wearing your mala beads as a necklace, you will derive tremendous benefits from their energies, and whatever crystals and stones make up the beads will promote your chakras. Another popular way of wearing your mala is on the wrist, although this will call for a very careful wrapping of your beads around the wrist several times.

It will be necessary to exercise caution so as to avoid wrapping it too tightly, because that could definitely break the mala. The tassel can be tucked under the beads or worn loosely, whichever appeals to you the most. Alternatively, you can obtain a set of mala beads which are intended to be worn on the wrist, and these are smaller bracelets consisting of either 21 or 27 beads.

Some people wear several of these mala bracelets and layer them, so as to accommodate specific intentions for each bracelet. In either case, touching your mala bracelet throughout each day can be a big benefit in helping to remind yourself of all the positive affirmations of your life.

How Can I Use my Mala Beads?

However you choose to use your mala beads, you should remember that all the traditional practices merely represent ways they have been used by others, and you are certainly under no requirement to follow those traditions. Owning mala beads is a personal experience, and you should attune yourself with the energy of the beads in any way that seems most effective and most comfortable to you.

That being said, there are some traditional ways to use the beads in your daily meditation practice which others have found useful and effective. They are considered to be a wonderful tool for focusing your attention and for providing a tactile way to center yourself as your mind roams throughout the universe. By rolling the beads through your fingers periodically, you can re-ground yourself and re-focus, so as to direct your energy and attention.

Here is one method for usage which is been passed down through the centuries:

Wear According to Your Intentions

Mala beads have been used and worn for literally thousands of years, and for many people, have deeply spiritual significance. Although there are prescribed ways of wearing and using your mala beads to derive the maximum benefit from them, it should be borne in mind that they can be literally anything the wearer intends them to be. They provide a very personal experience for every user and practitioner, and are just as useful in a yoga session as they are when worn as jewelry to a special event. 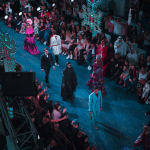